First, a few definitions to make what follows easier to follow:

In statistics, the “order statistics” is a sample of n observations ordered least to greatest (ascending): {X1,…,Xn}. i is the i-th values: Xi. In code, we adjust for the zero-indexed array by subtracting 1 from i. To make the distinction clear, j is i adjusted.

For arrays of sorted values, the percentile rank at index j is math.Ceil(p*n) - 1. The base calculation is i = p * n.1 Fractional i are not valid, so math.Ceil rounds up if i is not a whole number. And - 1 adjusts for the zero-indexed array, yielding j. The base calculation has variations,2 but this is the simplest and often used in code because it can be used inline like: pval := values[int(math.Ceil(p*n))-1]. The most important point is:

Nearest rank works best with at least n=1000, else P99 and P999 are the top two values which defeats the purpose of percentiles: to discard the top (100-n)% values.

Software can quickly and easily record thousands of values, creating a representative sample for which the nearest rank calculation works very well. But physical systems and humans are usually a little slower and time-consuming, perhaps only able to record tens or hundreds of values. When the sample size is relatively small, linear interpolation is a better method for calculating percentiles.

Linear interpolation estimates the value between two ranks. If you Google it, you will find that different programs (Microsoft Excel, MATLAB, etc.) use slightly different equations. Wikipedia has three variants, but the primary source is Sample Quantiles in Statistical Packages by Rob J. Hyndman and Yanan Fan. The TL;DR is the equation on page 363 (page 4 of the PDF),

and Table 3 on the next page which lists values for the constants, and section “5. SUMMARY AND CONCLUSIONS” which concludes that “[definition 8] is the best choice.” Definition 8 is more commonly called “R8”.3 R6 and R7 are good choices, too, so R6, R7, and R8 are commonly used in software.

The second step interpolates the percentile value by adding the lower rank value to the diff of the upper and lower rank values multiplied by f, the fractional part of i. Let’s put it all together in Go code that demonstrates using R6, R7, and R8 with known input and output values for P90:4

Function pValue is the second step of the equation which differs only by the R-calculated i. k, the integer part of i, is the lower boundary when subtracted by one to adjust for the zero-indexed array. k is also the upper boundary when not adjusted for the zero-indexed array. Then add and multiple the upper and lower boundary values with f, the fractional part of i, as shown. The result is an interpolated P90 value. The value is somewhere between the upper and lower rank values. Whereas nearest rank yields an observed value that might not be the actual percentile, linear interpolation yields a non-observed value that is statistically equivalent to the actual percentile.

Let’s go back to the original question—where is P95?—with []y. The i for each R-equation is:

Since those are non-adjusted lower boundary i, R6 and R8 do not work because y[10] is the maximum value. But R7 would return a value between y[9] and y[10]. By contrast, nearest rank returns the value at y[10]. For this small sample, R7 is the most accurate because P95 is, by definition, less than the maximum: P95 < P100.

P999 request latency (response time) is the gold standard for high-performance, low-latency applications. To determine which methods is most accurate for P999, I compared nearest rank, R6, R8, and “Hybrid R6/7/8”.

For nearest rank, the values are not sampled. This is the simplest, most basic approach but not commonly used because it is not memory-bounded. For example, file “100k-1-or-2” has 100,000 values. For 8-byte float64 values, one sample is 800K. Not terrible but also not necessary because, as that line shows, all the algorithms are very close to the real P999 value highlighted green. (Real values in green arise when the P999 rank happens to be a whole number.)

R6 and R8 (2k) use their respective R-equations, but “Hybrid R6/7/8” use both methods: nearest rank if the sample is full (n >= 2000), else the respective R-equation. The reason for “hybrid” algorithms is discussed later. First, let’s look at the results (click to open PDF): 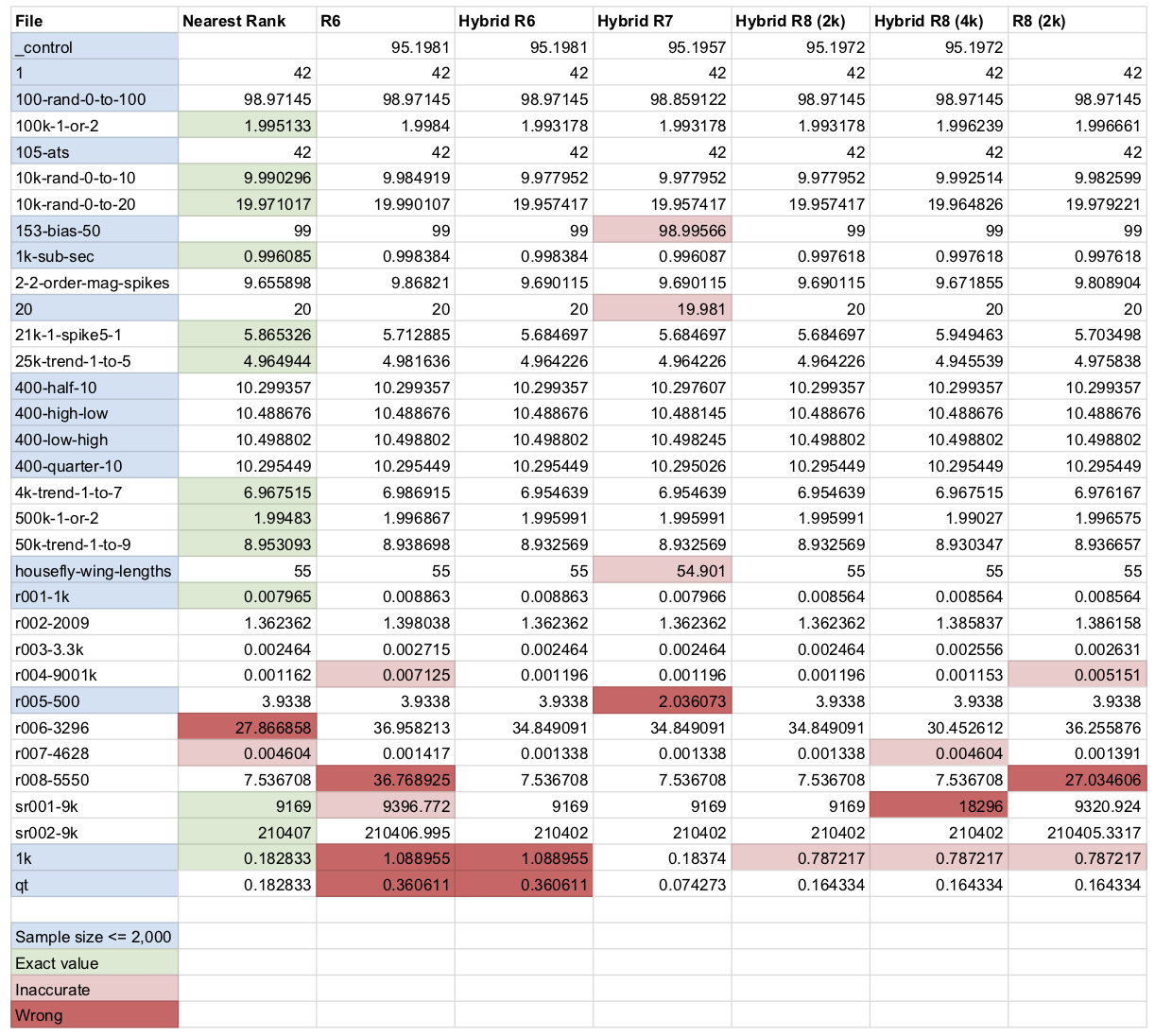 Hybrid R8 (2k) is the clear winner: only one inaccurate value for file “1k”. File “r008-5550” demonstrates the benefit of the hybrid algorithm: R6 and R8 (2k) are wrong, but all the hybrids are accurate. Files “1k” and “qt” demonstrate why R8 is the best: R6 is wrong, and R7 is best for “1k” but wrong and inaccurate for other cases. Overall, the data agrees with what Hyndman and Fan concluded: R8 is the best choice. Even better: Hybrid R8, which is what go-metrics uses.